The Hunter in the Dark 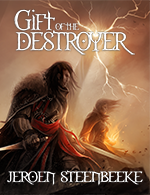 Book 1: Gift of the Destroyer

The Revenant's armies have swept aside all opposition. Entire nations have fallen, crops have withered, and those who have not fallen to the Revenant's forces have starved instead. The resistance lies dead at his feet, and the last two of them are surrounded by his forces, when they find a way to travel back.

Thirty years earlier, the scarred warrior Brenor arrives at Lianna's farm. He holds the key to defeating the Revenant before he becomes a threat, but to do so, he needs to cross the Forbidden Lands. And for that, he needs Lianna's help.

Together, they are the only ones capable of preventing the future Brenor has already lived through. But to face the dangers of the Forbidden Lands, and the man who is hunting them both, Lianna must master the Gift of the Destroyer. 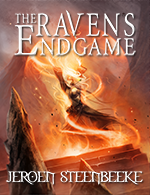 Three decades have passed since Lianna's journey to the north, and the Revenant has never existed. Childbirths are rapidly increasing worldwide, and despite tensions between the various nations, the world seems to have returned to normal.

But those with the Gift of the Seer know differently. From the Northlands to Ktharia, they dream of a vast wall of flame consuming all in sight, leveling mountains and evaporating oceans. In the midst of all this, a young girl wakes up in an alley in Chaedin. She does not know her origins. She does not know her name. But she has the same dream, and she knows that she is the only one who can stop it from happening.

For the past twenty years, the Veiled Ones have been trying to prevent a creature of pure darkness from escaping into their world. With their numbers dwindling, they are forced to travel north to the Seven Villages. Here, they find Lenye, and by taking her friend hostage, compel her to come with them.

With their mother Naima incapacitated, the only one left to go after her is her twin brother Ben. But Ben is blind in daylight, and his only allies are a historian, a street girl, and his aging grandfather Brenor.